A message from the Kremlin 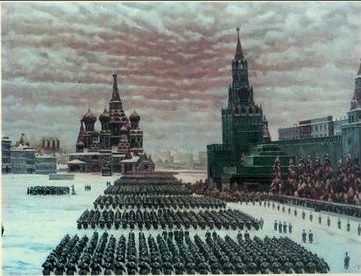 Vladimir Putin has plunged into history to bring up a message to the world’s democracies. The pre-war period, the wartime and the international order that the winners had built after the war demonstrate that the Allies of those times must close their ranks again today, because their condominium is indispensable to the international stability which is their “duty” is to defend, he argued in a paper on the seventy-fifth anniversary of the Nazi defeat.

It is said only in half-words, only between the lines, in a long text of 55,000 characters running over 25 pages, but the further one advances in the reading of this pensum, the more its meaning seems obvious and the more strongly a question arises.

Why does the man who had been so eager to reverse all the democratic advances of the perestroika, who annexed Crimea and waged war in eastern Ukraine, who so horribly commanded the bombing of Aleppo and is preparing to provoke the amendment of the Constitution to ensure the continuity of his reign, why is this autocrat who has decreed the death of political liberalism, is pressing these democracies he despises and is determined to weaken them, to establish a “shared responsibility for the future” with Russia?

For many, the answer is clear. It holds out to them, they say, a mirage whose sole aim is to deceive and to divide them. This is perfectly possible. We cannot exclude it, but beware! This is already what many sovietologists, journalists and diplomats thought during the Gorbachev years. We know what this error of judgment has cost the world, but the fact is also that Putin is not Gorbachev and that it is not because we made a mistake by not believing one that we should now take the other at his word.

On the contrary, we must beware of being naive, but this necessary caution should not force us to retain only this first hypothesis and not see that there is a second, more worthy of examination.

Vladimir Putin is in trouble and is just as much in trouble as the Soviet regime was in the mid-1980s. The violence with which the pandemic has hit Russia and the ambulance queues in front of Moscow’s hospitals have just highlighted the dilapidated infrastructure of what must be called more than ever the “poor power”. Popular discontent has consequently just increased, whereas it has been a long time since the constant decline in the standard of living made the popularity of this president holed up in his dacha at the height of the battle against Covid-19. Vladimir Putin no longer has anything of the young muscular man promising to avenge Russia’s humiliating retreat, and the wear and tear of this breathless Superman is becoming obvious as economic and geopolitical difficulties pile up on Russia.

The slowdown in the world economy and the growing fear of global warming will have a lasting impact on the price of fossil fuels and all raw materials. Russia can no longer continue to rely on what used to be its main resource. The Russian economy must reinvent itself and, if it is not easy for anyone, it is even less so for this tired country whose population is so disillusioned and whose isolation is so deep.

In Europe, Russia’s only friends are Mrs Le Pen, Mr Orbán and Mr Salvini and the intellectual currents inhabited by hatred of the Enlightenment and nostalgia for the cross and the sword. In the United States, a victory for Joe Biden would tighten the front of Western Democracies, while a re-election of Donald Trump would guarantee nothing more to Russian diplomacy than permanent uncertainty. In the Near East, the weakening of the Iranian regime and the extreme fragility of Bashar al-Assad leave Russia pretty alone in an increasingly chaotic region. On the Asian borders of this other half of Europe, China, finally, poses to Russia the challenge of an ascending power, ready to make it its vassal, it if it does not find support on the international scene.

Russia, in a word, would be in great need of this new modus vivendi with the Western powers that Mr Putin seems to hope for. This is hardly debatable, and the democracies, for their part, would have nothing to gain by allowing a real Sino-Russian rapprochement to take place, by having to face a military leap forward by Russia and by losing the economic opportunity to contribute to the development and modernisation of the world’s largest country.

There are many points of common interest which would be wrong to ignore, but we can judge a contrario, and many do, that the world’s democracies would do better to wait for the fall of Vladimir Putin than to put him back in the saddle by dealing with him. One can also consider that his text takes far too many liberties with the truthfulness of the facts for us to be able to establish with him the minimum of trust necessary for opening in-depth conversations. The dilemma is there. There are, on the one hand, excellent reasons not to hear what the Russian President has just said in half-words, but it would be, on the other hand, to fail to see that he is in a position of weakness and that his way of rewriting history by mixing truths with so many shameless lies is intended to cleanse Russia of all sin in order to make it a full member of this club of powers that Vladimir Putin would dream of rebuilding.

Because, what is he saying? Well, after having written, rightly, that the Second World War was largely rooted in the injustices of the Treaty of Versailles, he wants to convince his audience that Russia would have had no other choice than the German-Soviet Pact because Poland would have cosied up to the Nazis while France and the United Kingdom, in Munich, had bowed down before Hitler. Vladimir Putin uses the shame of Munich to justify an infinitely greater shame, the shame by which, on the eve of the invasion of Poland, Stalin had agreed with Hitler on a division of Central Europe between the USSR and Germany.

The way Vladimir Putin writes without any concern that it was to protect Poles from the Nazis that Soviet troops had entered the part of Poland that the Pact reserved for the USSR is simply odious. The presentation of the annexation of the Baltic States as being of their own free will is just as odious. The silence about how Stalin allowed the Nazis to crush the Warsaw Uprising and then to take over the martyred city and country is overwhelmingly cynical.

Everything in this text is terribly unpleasant and disturbing except…

Except that Vladimir Putin is right to hammer home that it was on the Russian front that Hitler lost ground and that the post-war rules of the game set by the Allies – multilateralism, the UN and the veto power of the five permanent members of the Security Council – had prevented a Third World War, despite the Cold War and the violence of peripheral conflicts. Let us return, he said in essence, to the balance of powers that we used to be. Let us rebuild this club of great and old nations that ruled and shared the world and whose degrees of noble descent hid so many crimes.

But this club is the United States, Russia, China and of course Europe, through France and Great Britain. The Russian President’s proposal has nothing absurd, because it could help to find the way back to multilateralism before unilateralism set the world on fire, but it is up to you, Mr Putin, to show your cards. What are you proposing in the Middle East, Libya, Europe (including Turkey) or the Central African Republic? It is up to you now to say. It is up to you to convince people of your good faith and your desire to restore Russia’s greatness by making it contribute to world stability. We are waiting, impatient and attentive.